Beginning of the Down East Yacht Club

On a warm summer day in June 1966 a group of yachtsmen at the BOATEL MARINA (now Tugboat) was standing on the docks having a good time laughing and telling jokes when Vernal Furbush, owner of the BOATEL, came down on the wharf and wanted to know why we didn't start some sort of a "FUN CLUB" because the group was always getting together on one boat or another having such a good time.

It was talked over amongst the yachtsmen in the Marina and adjoining docks and they thought it sounded like a good idea. We told Mr. Furbush that we would start a club and he offered us a room, in what was the old Boothbay Harbor Yacht Club, where we could hold our activities.

On September 17th, 1966 a meeting was called; an agenda was prepared so that the meeting would cover all pertinent points. At this time Janie Hart seemed to be the prime mover in getting the project into gear. 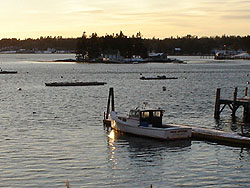 The idea of forming a "FUN CLUB" was thoroughly explored and it was the consensus that we should form an "in town" yacht club since BHYC had moved to West Harbor. Arthur Rousseau was elected Chairman and the business meeting was as follows:

The design for the Burgee was presented by Paul Adam at a meeting in mid October 1966 and it was well received by all members. The club was also listed in Lloyds Register along with the Burgee in full color.

The officers elected at the organizational meeting for the 1967-68 were as follows:

Thirteen people attended the initial meeting and by the end of 1967 had grown to 77 members. As you can see we have a very popular club as we have grown to 275 with more on the waiting list that are anxious to join our "FUN CLUB".

Let's all hope that these next years will be as successful as the previous ones and we will continue to enjoy a marvelous group of friends.